History of the Cemetery

People buried at the Cemetery

Witham's Cemetery has been a long forgotten and neglected historic cemetery. It is located between Knight's Court and St John's Court in the south district. Although there are some burials dating from the late 18th C and the early 20th C, the bulk of the burials are from the first to the third quarter of the 19thC, particularly during the various yellow fever epidemics of the time. The Cemetery has also been known as the Officers' Cemetery and Sandpits Cemetery. As the name suggests, it was primarily as a resting place for officers and their families and members of the colonial establishment of the period who died in Gibraltar. There are well over two hundred graves there and over the years of neglect, the tombs have deteriorated greatly, and the natural vegetation and trees have been allowed to swamp the area. Over more recent years the cemetery has had a number of clean up attempts which have had limited short-term benefits. 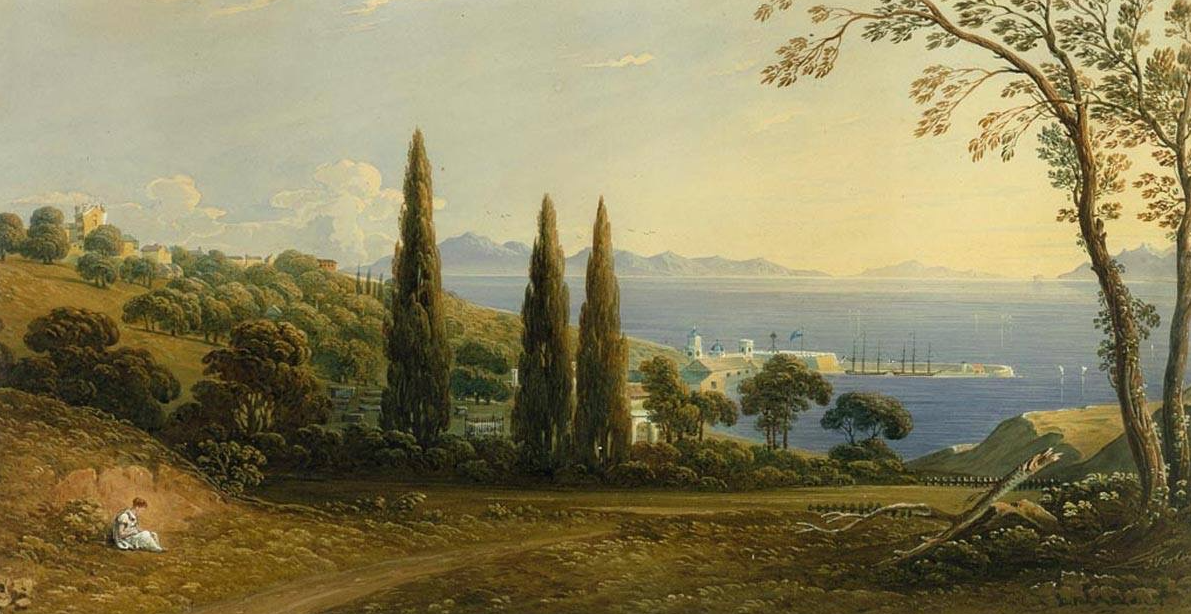 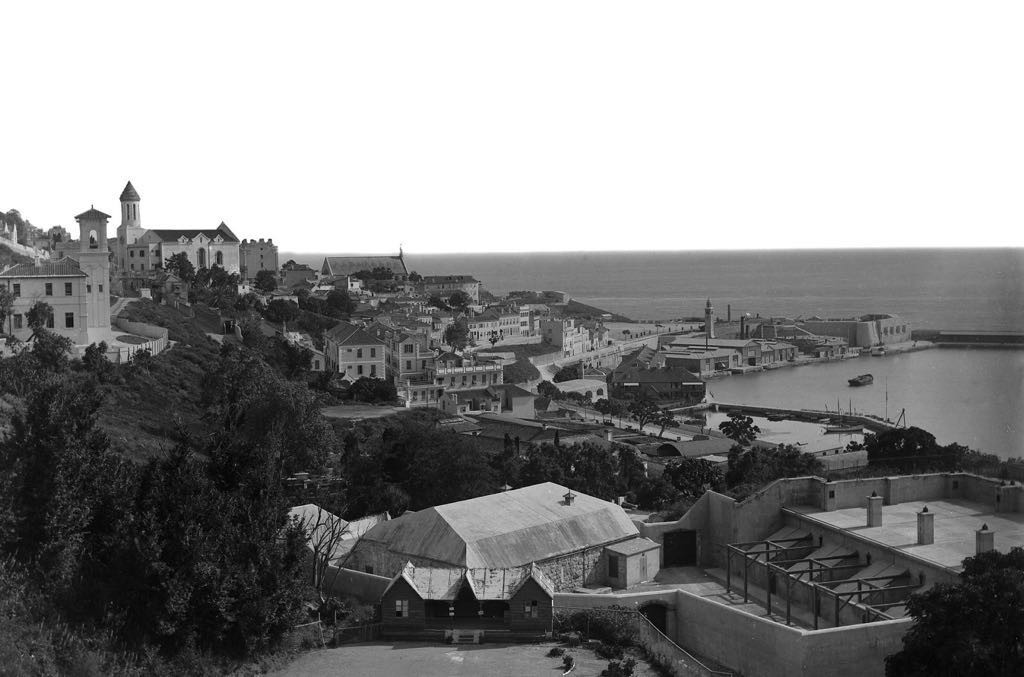 In 2014/15, the Gibraltar Heritage Trust decided to set the ball in motion to conserve and restore the site especially as the old St Margaret's School, formally Plata Villa, had come up for development. With the help of various volunteers and the developers of Plata Villa, Reafina, plans were put into place to bring the site into the public domain by proposing a pedestrian path through the cemetery from Upper St Joseph's Road through to the cemetery's present entrance at Sandpits magazine. 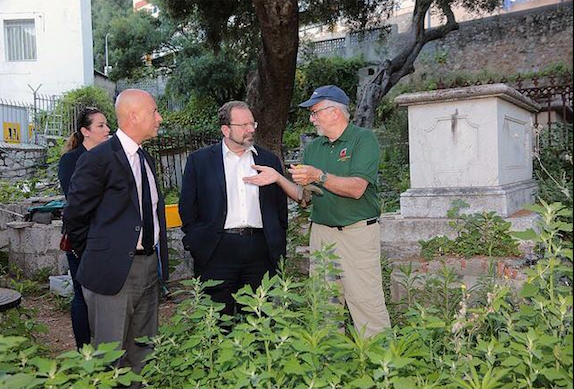 Minister Prof John Cortes speaking with the then Vice Chairman Keith Farrell. Volunteers are at Witham's Cemetery, on site every Monday morning. 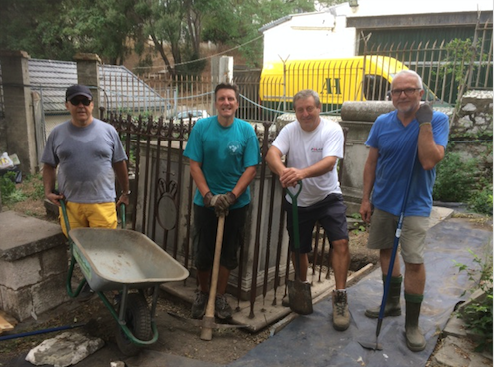 Various entities and organisations were brought into the frame including the Friends of Gibraltar, various departments of HMGoG, with the project managed and supported by volunteers and Trustees from the GHT. The project was slow to take off, but we are now seeing very significant progress. There has been the pruning of trees and constant management of perennial weeds and invasive species. The graves themselves have in many cases been rebuilt where possible using recovered material. Many of the vandalised and broken marble inscriptions have been recovered from the soil and put together for further restoration. A path has been built by the developers. 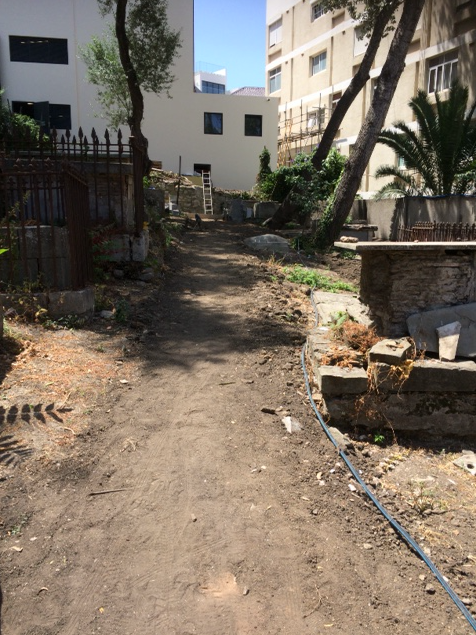 The path through the cemetery taking shape during the early stages. Reafina (the developers of Plata Villa) carrying out the works. 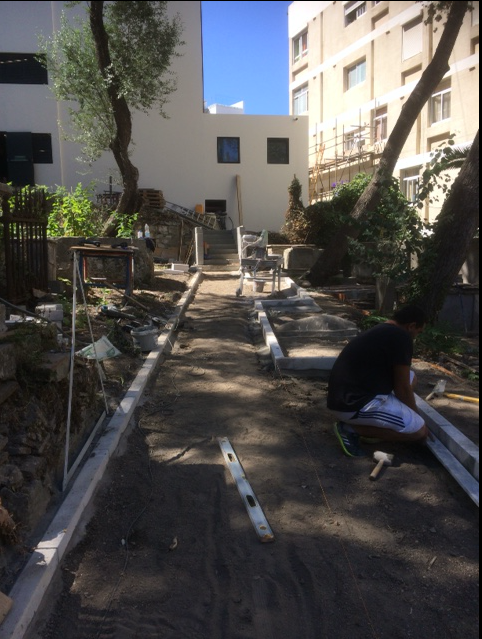 Along with the physical work has been the intellectual work of the correct identification of individual tombs and the collating of historical information about some of the very interesting and important individuals that are buried at Witham's.

The Trust has a regular team of volunteers who are on site every week. The team is made up of people with various skills, some have a heritage background, some have garderning skills, and others simply love seeing their work come to fruition. The work of the volunteers includes; basic grave restoration, the clearing of paths, weeding, general clearing of areas, as well as historical research.

If you are interested in volunteering with us or finding out more about the work of our volunteers, please email us. 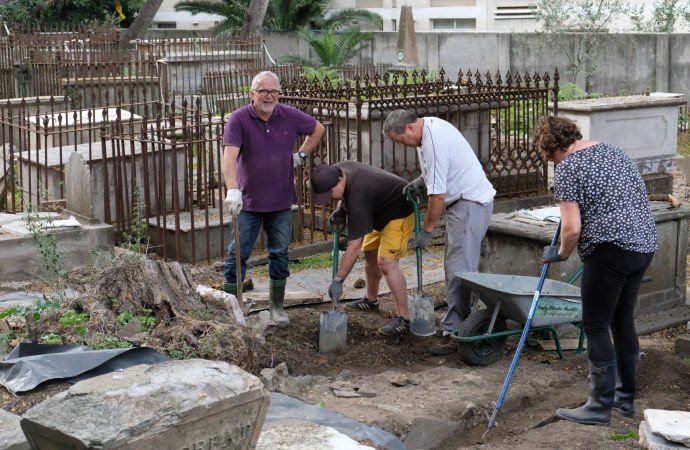 People buried at the cemetery

There are only a few 18th Century graves. It is from 1812 that the cemetery begins to be used regularly. Most burials took place in the first seventy-five years of the 19th Century.

From the records we know that in Witham's there are 12 graves of people who died during the 1828 epidemic yellow fever outbreak. The problems were addressed by Dr John Hennen who in 1826 was appointed Principal Medical Officer. His reconmmendations to Lieutenant Governor General George Don, grealty influenced the response to the 1828 epidemic. Dr Hennen died of the disease on the 3rd November, 1828.  A memorial tablet is visble today at the King's Chapel.

It is noted, that 16 Americans buried at the cemetery were disinterred and reburied at the North Front Cemetery.

Where are we on the Witham's Cemetery restoration journey? So far the trust has been making steady progress with restoring the integrity of nearly all of the tombs at Witham's. These and many others still need some sorting and repairing where possible of their marble or stone headstones and/or inscription plaques. Much work has been done in the moving and removing of large quantities of soil from around the tombs, the laying down of secondary paths around the cemetery and the construction of flower beds. The Plata Villa complex contractors completed the main path and finished the access steps from St Joseph's Road to the foot path through the cemetery two years ago.

Going forward, therefore, we still see the need for more volunteers who can provide physical labour for the clearing and cleaning of debris. We have been very fortunate that companies such as Jackpot Joy have provided us with two very active groups of volunteers for half-a-day sessions each, sometime back. They have set the bar for future volunteer group activities. We have also had help from the women's rugby team and their coach who have promised to come again to assist us. The volunteering 'bug' is catching on and we are hopeful that this will expand although this is generally an 'out of hours' activity and therefore adds more strain to the already heavily involved GHT trustees working at the cemetery. We foresee the grave and path restoration parts of the project taking another few months to complete with the planting and beautifying element and the interpretation aspect of the project continuing beyond this. We hope that this projection of progress may be accelerated by bringing more volunteers on board. So, if you want a physical and emotional change from your daily routines, whether you are retired or in employment, contact the Trust and be a part of this challenging but existing project.