The Gibraltar Heritage Trust is inviting nominations from the public for this year’s round of Heritage Awards.

There are four categories of Award:

It is very difficult to define ‘heritage’ and for this reason the scope of the awards are wide. Consideration is given to the nomination of any Gibraltar-heritage related project such as the preservation or sensitive refurbishment of a building, structure, monument or historic garden, school projects, publications, heritage related events, a piece of research or a work of art, protection of an important tree or trees that would have been felled, or preservation of important records that would have been lost, recognition of the efforts of an individual who has worked towards the preservation of Gibraltar’s Heritage.

Further details about the awards and nomination forms can be obtained from the Trust’s office at the Main Guard, 13 John Mackintosh Square, Mondays to Fridays, during normal office hours or can be requested by email from heritage@gibraltar.gi or downloaded from our website.

The Trust hopes that members of the public will participate by nominating candidates. You can see last  year's successful award winners online.

Closing date for nominations is Tuesday the 18th of September 2018. 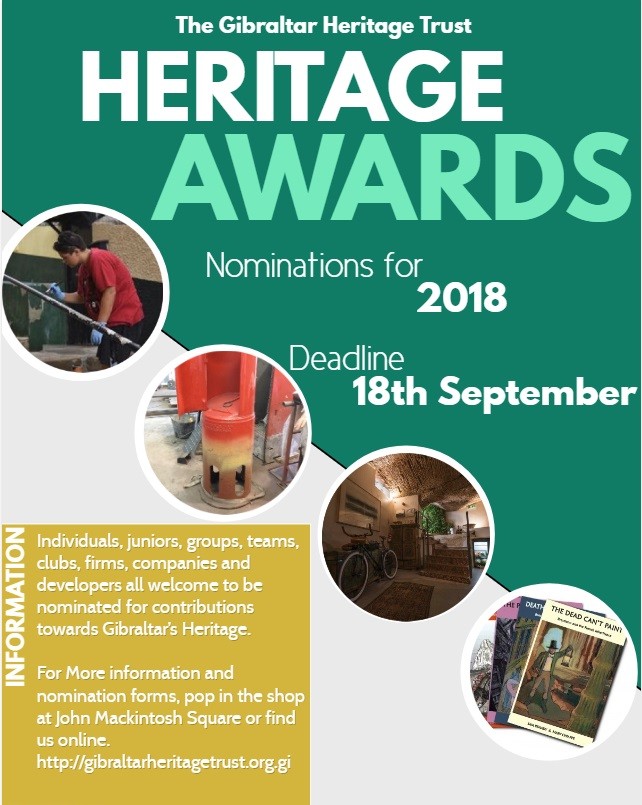