Wall at the Northern Defences 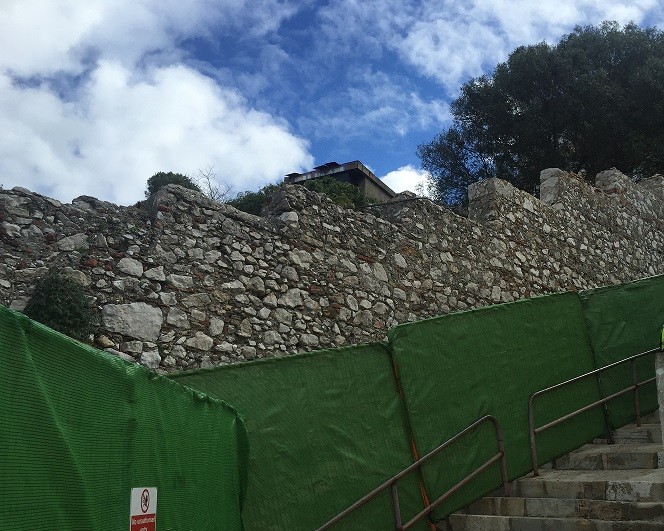 The Gibraltar Heritage Trust feels it should comment on the ongoing debate on the application to remove a section of wall at the entrance to the Northern Defences.

The Trust has, as with numerous other heritage sensitive applications and projects, been involved in and contributed to the debate surrounding this issue which, we must not forget, has arisen as a result of the wider project to tackle and address long standing issues of the large and historically important complex that is the Northern Defences.

The stability of this wall has been an item for concern for many years with the buttresses to support the lower section of the wall having been installed in the later 1990s. In the intervening years the upper section of the wall in question has been subject to years of flytipping with domestic and builders’ rubble, which over time has placed pressure on this wall, which was not designed as a retaining wall. It is in removing this accumulation that the full extent of the ‘back’ of the wall can be seen and these cracks and its stability assessed.

Aside from longer term management of the site, there are two issues at question here:

On question 1 – what is the significance of this wall? This is something that the Trust, the Government Archaeologist, the project manager, and the History Society have been looking into. So far we have been able to ascertain that the wall was built post 1771 and pre 1850. Why was it built? It is at the boundary of one of Gibraltar’s most strategic defensive complexes, so we can say it was built as a boundary, but also likely had defensive purposes – it had an addition in height made to it by 1860 so there was obviously a functional necessity to add to its height. There is an entrance archway in the wall, however it has been blocked up with a WWII pillbox, also significant in itself. What is its heritage value? This is not an easy one to answer. It has value as part of a major defensive complex. It has value as a wall that is over 100 years old. It has value as having served the purpose for which it was built – although this ascribed value has changed over time from defensive to boundary to exclusive of civilian versus military. There is value in the character of exclusion that this complex logically had (as a defensive stronghold).

On question 2 – Is the wall in a dangerous condition? There are 3 condition surveys and structural reports that have been conducted over the years all pointing to the general poor condition of the wall. The latest 2014 report, concludes, now that the full extent of the wall is visible, that if left indefinitely the wall does pose a danger. Is an intervention required? Yes. Can the wall be repaired? Possibly, but it may require partial demolition and rebuild. If the value is in the character that the wall lends to the area, then it is logical that consideration is given on whether to rebuild the wall to preserve that defined character if this is what is considered as being critical. This though, is another debate. Are there other mitigation methods? There are always options but these need to be considered within the context of the wall and its significance and economic and practical considerations.

It was with all this background debate that the application for demolition was filed and the item went to DPC for discussion. A significant amount of time was dedicated to the debate and the result of the discussion was that the DPC recommended demolition on the grounds of the wall being unsafe.

The Trust’s position at the meeting was to advocate a precautionary approach to the demolition in favour of maintaining the integrity and authenticity of this wall, unless it was deemed unsafe in which case we would advise partial rather than full demolition and a possible reconstruction.

Key to the decision, from our point of view, is understanding the significance of the wall and advocate that any subsequent action taken should be in line with this. The Trust feels that as well as having a duty towards the correct treatment of this wall, we also have a duty of care to the rest of the Northern Defences complex lying beyond it and that this debate should not deflect attention from the importance of addressing the site as a whole.