Following on from a renewed interest in the press last week stemming from the launch of a formal petition against the proposed Rosia Bay development, we find it is important to reiterate the Trust’s position on the proposed development as some of the comments made by the Developer might make it sound that the Trust is in agreement with the changes to the development as proposed. The Trust has been engaged in consultation with the Developer and their Architects and Consultants throughout the development of the scheme, but it would be unfair to state that the scheme has been ‘applauded’, particularly in respect to the recent changes. 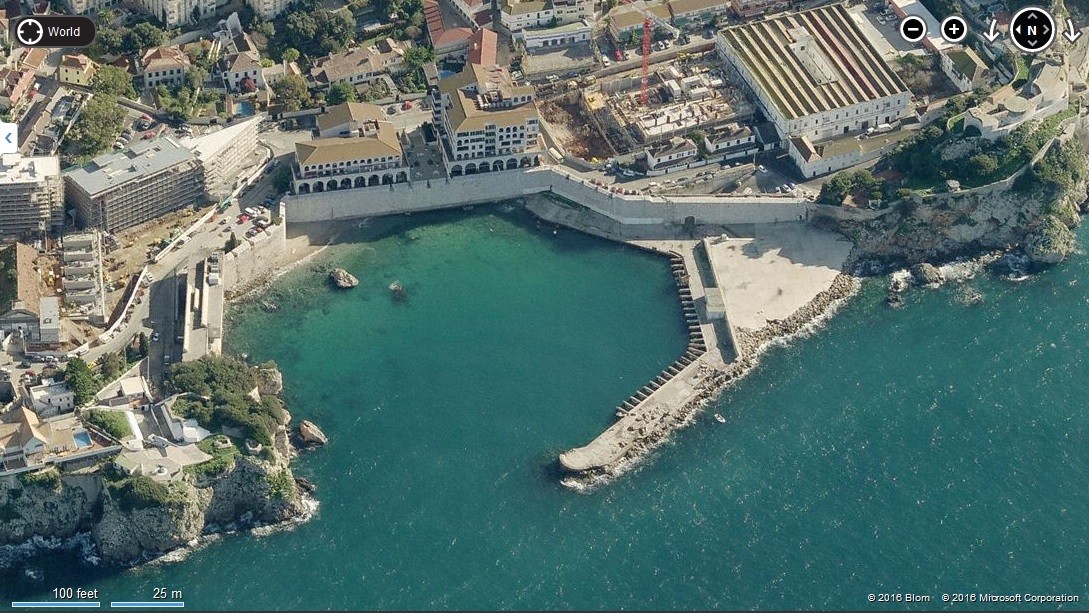 Rosia Bay has been in a state of neglect for over twenty years. Severe winter storms have caused progressive damage to the historic mole with the dislodging of stone blocks which are now strewn on the mole and undermining of the mole.

Successive Governments have sought to provide a solution by encouraging private developers to reconstruct the mole and find a ' commercial ' use for this historic bay. The developments which have been connected to these failed attempts, the reasons for which have remained outside the public domain, include Rosia Plaza and the Anchorage. In recent years the bay has been again put out to tender with various schemes proposed. These included a dolphinarium and more recently the proposed creation of a beach bar facility, boating facilities, a sandy beach and an enclosed water park facility on the reclaimed parking area. When the developers were granted outline planning permission for the above in 2014, the outline planning permission was conditional on the undertaking and submission of an Environmental Impact Assessment (EIA) for the proposal on the bay. This would inform the Developers and the DPC on any potential issues across a range of disciplines that might present themselves during the development process. The outcomes of this EIA  led the developer to resubmit to the DPC in early 2015 with, what we consider to be,  significantly altered plans, which now also include residential units argued to be essential to make the whole project economically viable.

The Trust reluctantly supported the initial scheme, which received outline planning from DPC, because of the undertaking to restore the mole and the opportunity to recover a derelict important historic site for community leisure use. At the time the Trust was less motivated to oppose the scheme because of the feeling that the restoration of the mole could only be achieved by accepting the whole concept which included the water park building on the existing hard standing at the site. In addition it was felt that if the project failed to be an economic success in the medium to long term then the structure could be dismantled with little damage to the historic bay, as save for a connecting access bridge to the roof of the waterpark building, the new building would not touch the defensive walls and was, apart from the housing for the access lift shaft, lower than the defensive walls which would therefore continue to give unobstructed views out towards the Bay of Gibraltar.

The amended scheme recently presented at DPC, although not receiving planning permission on the grounds that a number of studies required for the EIA had not been completed, represented for the Trust a change in character of the scheme and crossed some of our red lines – mainly the introduction of a residential aspect to the development as well as a roof top restaurant which now projected above the line of the Rosia defence walls. The addition of apartments to the scheme, although still within the massing of the original proposed waterpark building, bring a completely different aspect to the development. We do not believe that residential use is compatible with the proposed leisure use for the site. Apart from incompatible use patterns, we feel that the introduction of apartments will mean that the accompanying leases will guarantee the presence of the residential properties for ever, or at least the minimum lease period, which in addition to any natural evolution in business models for the waterpark, or even failure of the leisure element of the project, in the medium to long term would open the potential to replacement by more housing thereby further eroding the leisure use and historic character of the site for good.

We must remind ourselves of the following evolving factors including the restrictions imposed by the Gibraltar Development Plan as well as, the changes that have taken place in the area with the increased housing density, with massive increase in traffic, the release in the near future of the old FHQ to HMGoG, interest in the redevelopment of the Victualling Yard and the future re-siting of the police vehicle compound.

The Trust believes that Rosia Bay is a public asset with unique historic and natural qualities which could potentially be lost or degraded forever, albeit with public access conditioned in this scheme, by overdevelopment insensitive to its huge heritage value. It is only natural that a developer is concerned with economic viability but the Trust does not feel that the cost is worth it in the context of the erosion of this unique heritage site.

We have already expressed to Government our views on what we view as acceptable development of the site and the once in a lifetime opportunity to pull together a major asset for the long term enjoyment of the community. We feel that the site is of such importance to Gibraltar that is justifies a public project. Models for reducing impact on the public purse can and should be looked into- it has worked very successfully for Gibraltar as recently as the Commonwealth Park Project. We know that a sea protection system in the form of a breakwater is needed for the mole to be restored. The Bay can provide safe sea-bathing and diving facilities. Limited summertime boating facilities could also provided in the bay, a small scale restaurant facility is also possible, as is off season pier fishing. Some reference to the Bay's history can be exhibited on site, maybe in the form of a memorial to the fallen Nelson and Gibraltar’s own commemoration of the Battle of Trafalgar.

We will continue to hold these views through our representation on the DPC and in our continued meetings and interactions with the Developer and their agents. The Trusts aim is always to work towards the best scenario and conditions for the sustainable preservation of our heritage which often goes beyond thinking in the timescales of our own generation and lifespans.