The Gibraltar Heritage Trust (GHT) and the UK based Friends of Gibraltar Heritage Society (FOGHS) commemorated the 40th Anniversary of the Falklands Conflict with the unveiling of a plaque to honour the contribution of the Civilian and Naval Dockyard workers in the conversion of the S.S. Uganda and the H.M.S. Hecla into hospital and ambulance ships in support of the retaking of the Falklands. 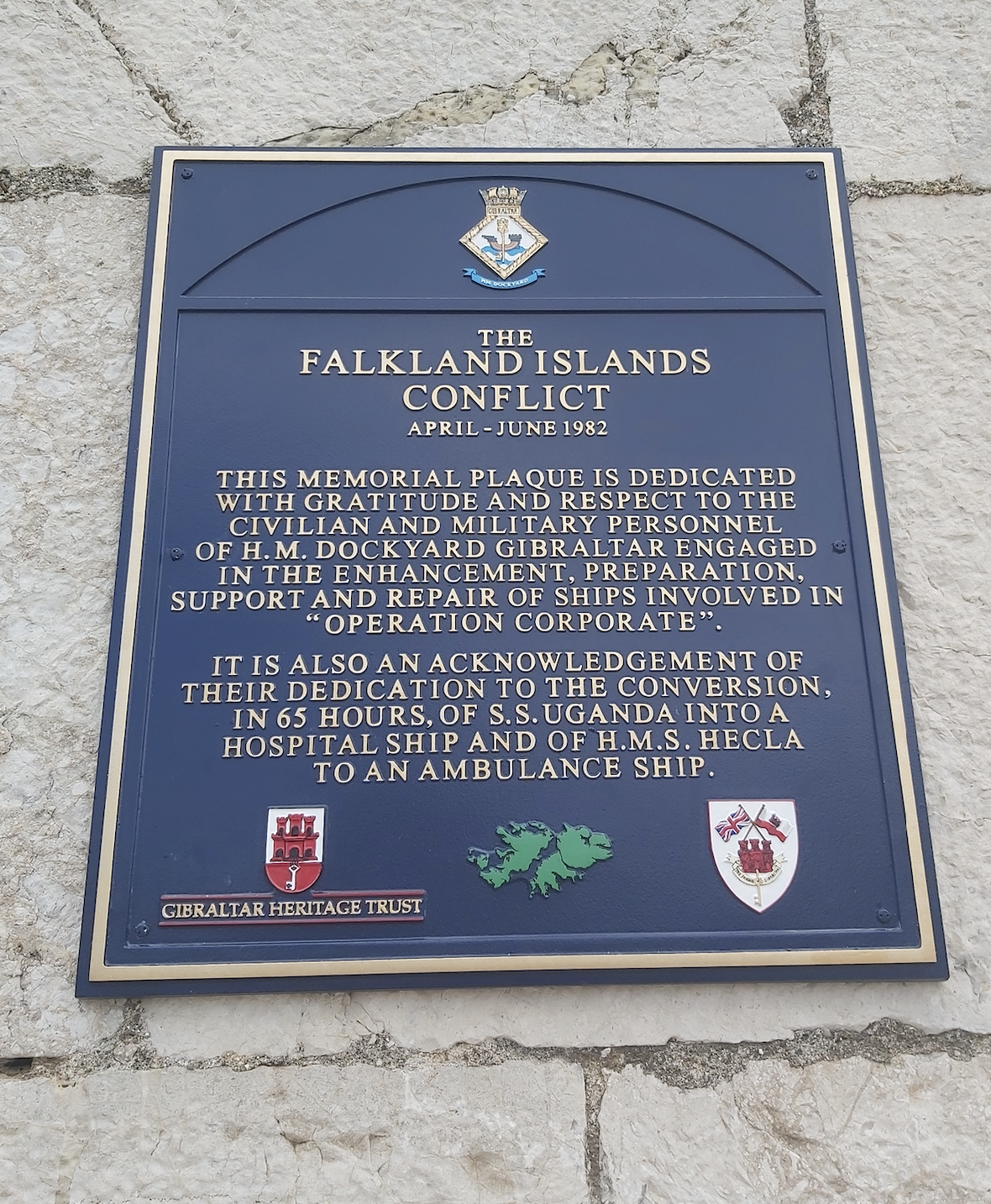 The plaque, situated by Ragged Staff Gates, was unveiled at 11am on Tuesday 19th April, 40 years to that day that the S.S. Uganda sailed from Gibraltar. The Gibraltar commemoration is the latest in a series of similar events at naval and ex-naval dockyards and establishments across the UK, that together show the enormity of the support and logistics network that contributed to the successful British defence effort. 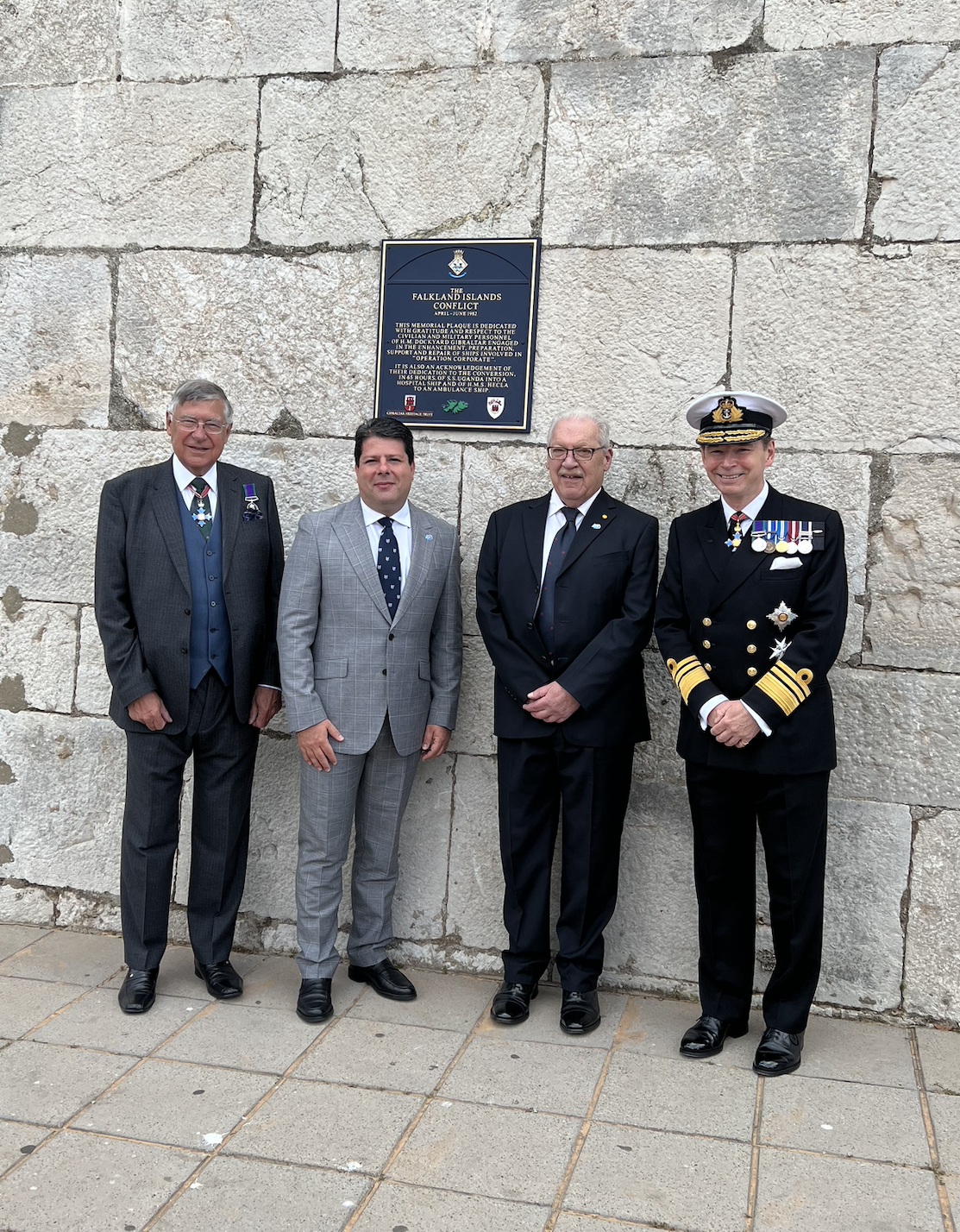 Image Above: His Excellency, The Governor, Vice Admiral David Steel (right), The Hon. Chief Minister, Fabian Picardo (second to the left), our Trustee Ian Balestrino (second to the right) and Friends of Gibraltar Representative Richard Lord (left). Mr Balestrino and Commodore Lord have been instrumental in making this event possible.

On 16th April 1982, the S.S. Uganda arrived in No.2 Dock in Gibraltar where she was converted into a hospital ship in 65 hours. This conversion was only made possible through the co-operation and dedication of the civilian dockyard workers who, at this point, had already been served their redundancy notices due to the closure of the dockyard. The Unions and Ministry of Defence came to an agreement to delay this until this conversion was complete.

In just three days, 600 hospital beds had been supplied, Wards, Operating Theatres, Intensive Care Unit, X-ray, and laboratories had been built and kitted out. A helicopter deck was added to the stern of the ship forferrying casualties to land and satellite communication was installed to facilitate contact with other ships of the Naval Task Force. S.S. Uganda set sail from Gibraltar on the 19th April 1982 to the South Atlantic and continued to operate as hospital ship until the 14th July. A total of 700 servicemen were treated onboard during this time.

Guests at the unveiling included His Excellency, The Governor, Vice Admiral Sir David Steel, The Hon. Chief Minister, Fabian Picardo, Commander of British Forces, Commodore Steve Dainton, Minister for Heritage, The Hon. Prof. John Cortes, the Minister for Equality and Community Affairs, The Hon. Samantha Sacramento, and The Hon. Richard Hyslop, Falkland Islands Government Representative to the United Kingdom and Europe. Other guests included veterans of the conflict and civilian ex-dockyard workers that were involved in the conversions as well as representatives of the GHT and FOGHS.

After the unveiling, the guests proceeded to a reception in The Tower at HM Naval Base. 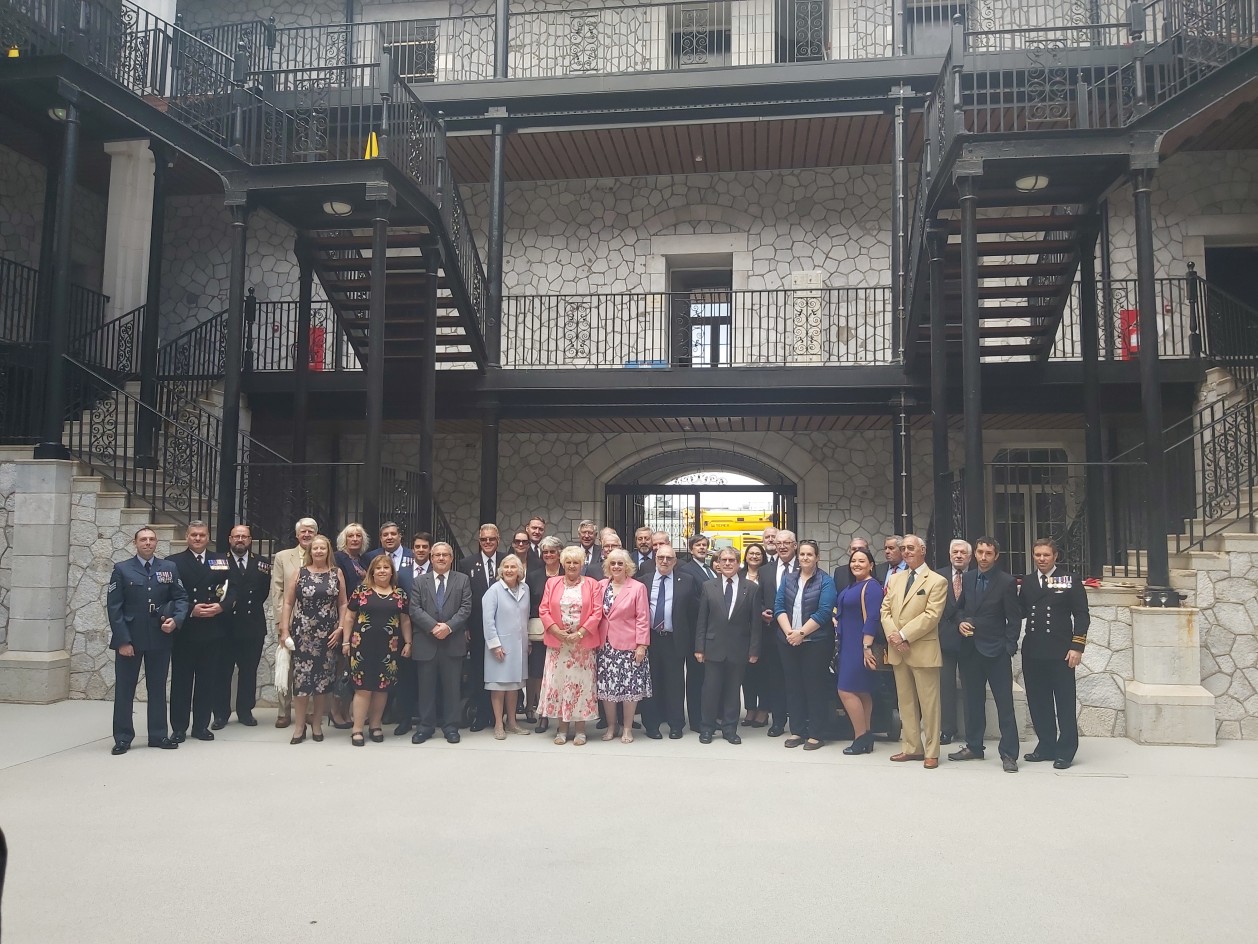 Image above: Guests at The Tower Reception.

Similar events happening around the UK: