History of the Alameda Grand Parade

Alonso Hernandez del Portillo, in his Historia de Gibraltar, written in 1610-1622, refers to 'Los Arenales', the present Parade ground and surrounding area extending from the Southport Gates and including the Alameda Gardens. He stated that they commenced at the foot of the Rock and went all the way down to the sea, stretching some 1300 metres to 'Los Huertos' that is the orchards and cultivated fields near the present St Joseph's Housing Estate and Rosia Dale.

Portillo continued by stating that although the red sand was very convenient for building purposes, it would be better that we did not have so much sand in so near the City. He said that there was an aqueduct on the sands which had been constructed in 1571, which was now broken and lost. In its initial form, the works were engineered by a Jesuit priest under the patronage of the Conde de Corsana. It comprised of two underground reservoirs, one of 15,000 gallons and the other of 8,300 gallons. It was later repaired and in 1694, a third reservoir was constructed. (A shaft tower which leads down to where the water was collected, may be seen on Rosia Road). 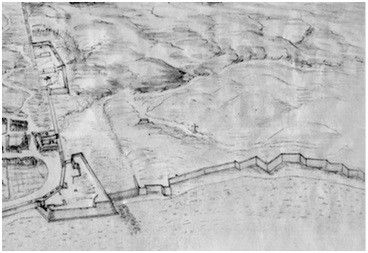 Even before this date, there are various references to the area. When the besieging army of Don Alonso de Guzman attacked Gibraltar in 1309, his forces landed on the Red Sands. This name derives from the Arabic 'Turba al-Hamra', meaning the Red Hill and would have given the name to the district nearest the south wall of the City. At that time, the red sands were fairly visible, even from a great distance, and would have extended northwards to at least Cathedral Square, as is evident whenever deep foundations are dug up in the City.  Similarly, when King Alfonso XI of Castille hastened to the relief of the beleagoured stronghold on 22 June 1333, he landed his troops on the Red Sands, although he was later to negotiate a truce with the Moors in August of that year and withdraw his forces. In the Middle Ages, there was already a tiles work on the Red Sands, as is recorded in 1334/51 by Ibn Batouta.

Robert Poole, who visited the Rock in 1748, wrote that 'passing out of Southport Gate, we passed through the burying ground and part of the Rock where to the right is a sandbank of about 15 feet high. Part of this mighty bank of sand is used for ballast to such vessels as want it. Further on stands the gallow.'

Lord Tyrawley, Governor of Gibraltar, was concerned about having graves set up over the City's water supply, so in 1756, he ordered the officers of his staff to lay out the area as a proper parade ground, with the North Front Cemetery being opened at the time (some of the existing gravestones were later transferred to Southport Ditch Cemetery, later Trafalgar Cemetery when it was opened in June 1798). Richard Twiss, writing in 1773, stated that he has seen officers playing golf on the Red Sands as he had seen it played in the links near Edinburgh and Francis Carter in his 'Journey from Gibraltar to Malaga, written in 1777, stated that the 'Red Sands are very conspicuous.'

During the Great Siege (1779-17830, the Parade Ground was used on 27th November 1781 to form up the 103 officers and 2065 men under General Ross for the Great Sortie that would destroy the advanced enemy works in the Spanish enemy lines.

On 17th November 1800, a great procession moved from the Convent with five military bands and marched to the Grand Parade where a royal pavilion had been erected. General O'Hara, on behalf of the King, bestowed the Order of the Bath to Admiral Saumarez, the hero of the Battle of Algeciras; a 63 gun salute was then sounded. On 10th May 1802, HRH the Duke of Kent arrived in Gibraltar on board HMS Isis as the new Governor and proceeded to Grand Parade where he was saluted by the whole garrison, drawn up in a square. After inspecting the troops, HRH went up to the rising ground at the south to meet the principal inhabitants and ladies.  In December of that same year, following an unsuccessful mutiny by some regiments, the Grand Parade became the setting on 4th January 1803 for the execution by shooting of three of the ringleaders in the presence of all the troops. 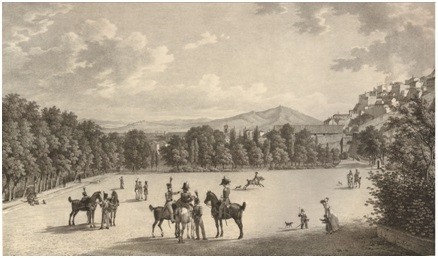 Grand Parade in 1826 from where the Alameda Botanical Gardens are now.

On 6th May 1815, Lieutenant Governor Don authorised the issue of a lottery for the purpose of raising money to build an alameda) on the Red Sands. A total of 8 lotteries were held and the walks of the Alameda opened on 14th April 1816. Surprisingly, the next time that an official lottery was held (the commencement of the present Gibraltar Government Lottery), was in October 1947, when a local lottery was launched in order to service the loan for the construction of new housing (Alameda Housing Estate -'Los Humfris', which was built in the same area at a cost of £4.5 million). 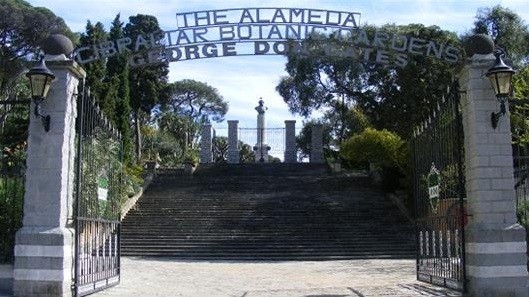 In 1886, the Assembly Rooms, later the site of the Queen's Cinema and Queen's Hotel, were constructed on the north section of the Grand Parade; it had a stage for theatrical performances, ballrooms, restaurants and the Freemasons Lodge Rooms. These Assembly Rooms became the venue for the official lunch offered the HM the Queen and HRH Prince Philip during their Royal Visit to Gibraltar in May 1954.

On 1st March 1880, HE the Governor, Major General Anderson, conferred the Victoria Cross on Private John Williams at the Alameda Grand Parade. This most prestigious of bravery awards had originally been awarded to Williams on 2nd May 1879 for his action at Rourke's Drift in Natal, South Africa during the Anglo-Zulu War, when he fended off a number of Zulu warriors and managed to bring out and save 8 patients from the attacking forces.

In 1888, the 'Circo Teatro de Verano' was set up in the Alameda Grand Parade; this remained in situ until 1895, when the Military Authorities forced it to be dismantled. In July 1897, the Parade was the venue for HM Queen Victoria's Jubilee Celebrations with festive illuminations and fireworks being enjoyed by the thousands of spectators. It has been the location for many festivities and important events. 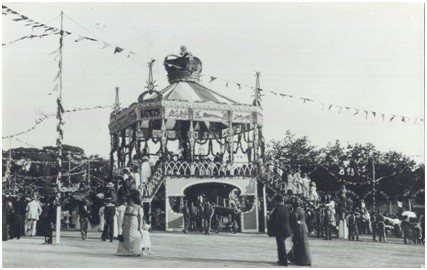 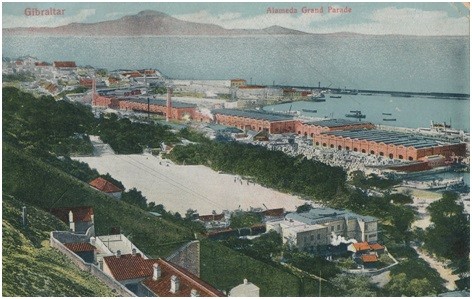 The Alameda Grand Parade became the venue in the 1920s and 1930s of the following major events:

(a) June 1911. First Empire Fair held. Trooping of the Colour also took place with commemorative medals and mugs given to schoolchildren. These fairs were held towards the end of May every year until 1914 (commencement of the Great War), then continued in 1927 up to 1939 (commencement of the Second World War).

(b) 31st January 1912. Presentation of new Colours to 1st Battalion of the Staffordshire Regiment by HM King George V. The ceremony was attended by HRH the Infante Don Carlos of Spain.

(d) 1935. Parade of schoolchildren to commemorate the King's Silver Jubilee. HE the Governor and Lady Hamilton presented commemorative medals to them.

On 8th May 1945, Victory in Europe Day was celebrated on the Rock with the principal centre of festivities being the Alameda Grand Parade where a funfair was held together with special illuminations and a wide variety of side shows. The Gibraltar Chronicle reported that 100,000 cigarettes, 8,000 pints of beer, 10,000 sandwiches, 3,000 bottles of lemonade and about 5,000 cups of tea would be distributed free of charge. Due to the need to repatriate evacuees, it was necessary to erect nissen huts in various areas of Gibraltar, including the northern end of the Parade Ground. The open area was also used as a huge open air storage area for the building material required for the construction of the Alameda Housing Estate. This resulted in the usual petty thieving, bringing about the rather frightening rumour of 'El Tio del Capote'.

In 1965, the cable car bottom station was built on the Parade and from that year onwards, the annual Gibraltar Fair was held every July until 1977. The circus was also a regular caller at Gibraltar and was sited at this location. The Alameda Grand Parade continued to be used for Sortie Day Parades, Presentation of Regimental Colours (the Gibraltar Regiment in September 1971), Corpus Christi Open Air Masses, Freedom of the City Parades and the National Day Fancy Dress Shows. 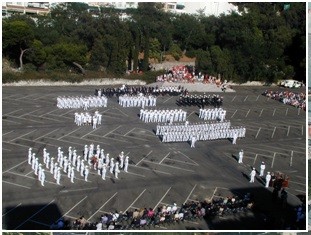 Grand Parade still in use recently for ceremonial parades.